Maybe it's because I recently lamented the unfortunate loss of my Little House on the Prairie books. And maybe it's because I've been having an online conversation about books with one of my former students (who now has three kids to read aloud to). At any rate, I have been having fun thinking about books to read aloud to children.
Here are three lists with lots of great ideas:
http://www.classical-homeschooling.org/celoop/1000.html
http://www.worldmag.com/articles/12466

http://www.worldmag.com/articles/12468
I was such a reader when I was a kid. I have great memories of my dad reading aloud to me. I used to get in trouble for reading in school when I was supposed to be doing math or social studies or something. Either Josh or I read with Lorien every night. My favorite right now is Guess How Much I Love You. Such a sweet book with beautiful illustrations! I can't wait until we are into chapter books.
What were your favorite books as a child?
at 8:20 PM No comments:

It seems so strange to say that the FLI all alumni reunion that I have been planning for three years has now come and gone. I am very pleased with how the weekend turned out, even though the event felt like a moving target for so long. We really didn't know how many people we were planning for until about a month ago. In the end about 200 people came through the doors and it was sooooo good to see old friends again ... and to meet some new ones.
And now, after two moves, two trips to Ohio, a funeral, a reduction in force at work, the addition of some new responsibilities and a big deal reunion in the past five months, I have eight whole days off. In a row. Loverly! Unfortunately, Josh doesn't have the same luxury. Having him home with us is the only thing that would make this week even better.
Last night I slept from 10:30-7. Got up, fed Lorien breakfast and went for a short run with her in the jogging stroller. (Haven't been running much in the past...oh, two years, so we are starting slow.) Came back, ate my own breakfast, put baby girl down for a nap and then took my coffee outside to read the last part of Jeremiah on the backyard swing. (I won't even tell you how long it has taken me to read Jeremiah. It's embarrassing.) Had a shower, and now I am read to tackle the last piles in the basement.
I'm really hoping to finish going through boxes today and tomorrow. Mom, Dad and Steve are coming tomorrow evening. It will be so good to have some time with them, and Dad is itching to get some projects done around our house (yay!). I'm hoping to have everything all staged to do that so that we can dispense with the moving in and really start making this house a home.
at 9:49 AM 1 comment:

This was my dress when I was little. Now all she needs is a pair of ruby red slippers.
These photos were taken last weekend, and she was still needing some help to stand up behind her push toy. This weekend she can pull herself up! 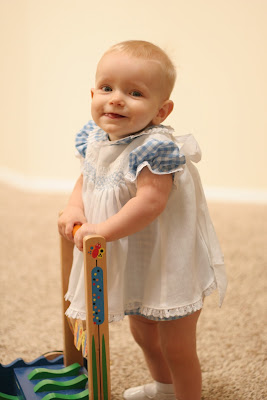 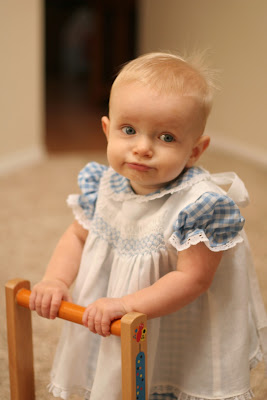 This is my small group from FLI's Summer 2010 Semester. I love them! All semester, they kept joking about coming up with a name for our group like the warrior princesses, or something. For graduation, I got them each two bright pink roses, and the name of the rose variety was "hot princess." So I guess that's what we are now called. :) 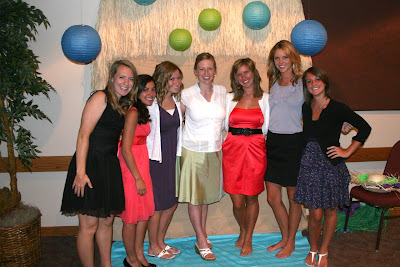 Kelly Lynn, Emily, Franki Jo, Me, Sarah, Stina, Kortney
Together we studied Christian community in the New Testament church. Acts 2:42-47 was our core passage. We noted that one of the core elements of the early church community was that they prayed together for big things and that God was in their midst working in big ways. The thing that will probably stick with me from this group is that, on the last night we met, we shared "impossible" prayer requests. Then we prayed together for big things to happen. And because our God is the same God who showed up in Acts, I think that means I should be expecting to see some big answers to those prayers. Can't wait to see what God will do!
at 8:44 PM 2 comments:

I have been meaning to post these for a while: Some really neat old photos we discovered as we were going through Grandma Harris's things and preparing for her memorial service... 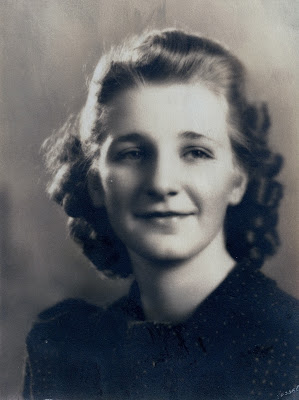 My grandma as a young woman 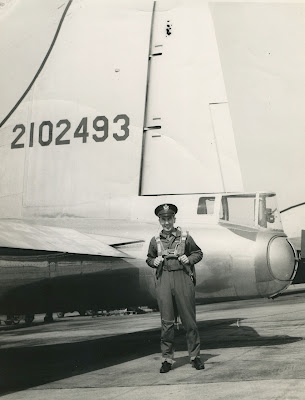 My grandpa during WWII 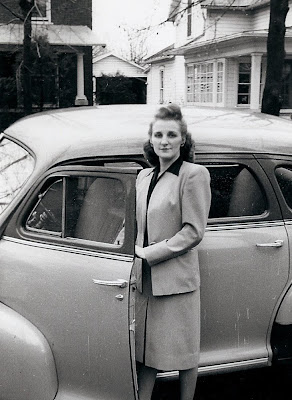 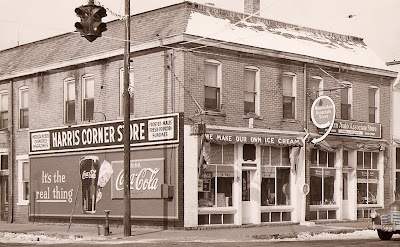 My grandparents were small business owners after my grandpa ("pappy") got out of the military. This is the store they owned in New Carlisle, Ohio. 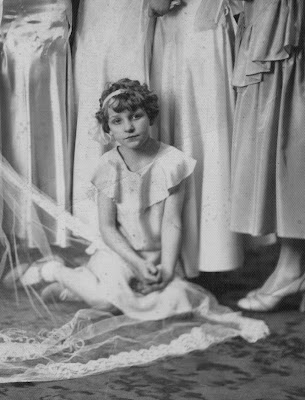 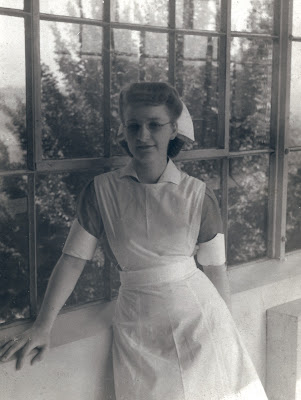 We have been taking the time to move into our new house slowly, for a couple of reasons. First, with working full time and parenting, you just can't set any speed records. We plan to be here for a while, so once we found all of the things we need to use on a daily basis, there was no more need to rush. We are now unpacking at a snail's pace.
Second, we've got stuff in boxes that has been there for years. Some stuff got moved to our last place in boxes and never made it out of those boxes. We are taking the time here to go through each one, purge what we don't need, and organize what we do need. Also, I think I have finally escaped the season of life when I collected all of the free junk I could come by, just because it was free. Now I'm only keeping it if I will really use it. Otherwise it goes in the Goodwill pile. Even if it was a really great bargain to start with.
We are discovering some things in the unpacking process:
Best discovery (Josh): the hand-carved 82nd Airborne plaque he had made in Haiti ("This is one of the coolest things I own!"). He had totally forgotten about it until he found it in a pile tonight.
Most time-capsule-ish discovery (Lindy): a letter I wrote to Lori Ferguson, who was at Cedarville University, about a month into my freshman year at Taylor. I had written it, stuck it in an envelope, and sealed it, but never mailed it. It has been sitting in a pile of old stationery for 15 years.
Saddest discovery (Lindy): Somehow the box containing my Little House on the Prairie books got wet, and they are ruined. I read those books so many times I can't count, and I was very much looking forward to reading them aloud and passing them on to our kids. The books can definitely be bought again, but I am sad to have lost that set.
Also, a kind of strange realization I have made: For the first eighteen years of my life, I was very stationary. I lived in the house that my great grandfather had built—the same house where my dad had lived since he was seven. On the same block where my whole family had lived for four (five?) generations. Then, when I left for college, I suddenly became very transient. Depending on how you count, I moved somewhere between 14 and 18 times in 15 years. This current move has (hopefully) ushered in a new season, and I am realizing that I might actually stay here for a good long time. It's a different kind of feeling, and I like it.
at 10:07 PM 1 comment:

We have known it was coming for some time now. Rumblings of budget shortfalls and reductions in force have been with us for a few months. Friday was the day that the rumors and guesses became concrete.
Our FLI staff of 14 was cut by four. Ouch.
We met at 9:45 a.m. to hear the news as a staff (this was after the leadership met individually with each of those who were directly impacted). Our VP was wise enough to tell us we could all go home after that meeting. Not a lot of work was going to get done after that anyhow.
Today we had an all-staff meeting (as in all of FOF, not just the Institute) to hear the big picture. A 13 percent reduction in force. One hundred ten people lost their jobs and 50 more open positions were cut. We move forward as a 750-employee organization.
This is the fifth round of layoffs I've lived through at Focus. Every one has felt like the loss of family members. I suppose I should take the fact that I'm still there after eleven years as a indication that God has a reason for me being there.
I do need to share a very mature perspective offered by my co-worker Karla (who was one of the four) and her husband Gary, who was hanging around at the end of business today. "We've been through harder times than this, " Gary says. "This is nothing compared to a crop failure."
True. Nothing compared to a crop failure.
Gary goes on to say that there was one summer back in the seventies when there were no crops at all. "All that we and our neighbors raised that year was kids."
Well, I guess you've got something to show for that, huh?
Yes we do. Yes we do.
at 9:46 PM 2 comments: