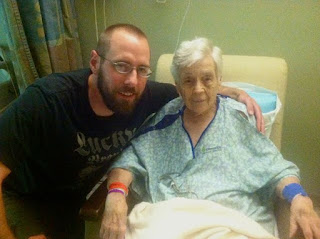 Thursday, June 6: Josh and my brother Steve leave Ohio in a Penske truck to move Steve's stuff to Colorado. They stop in Greenville, Illinois, to see Grandma Keffer, who is in the hospital with pneumonia.

Friday, June 7: Mom drives the kids and me to the airport at 6 a.m. Dad Keffer picks us up in Denver at 10 a.m., brings us home and I go straight to work.

The Summer 2013 class at the Focus Leadership Institute has arrived, so I want to be there for at least half of orientation. I am encouraged. It's been stressful around the Institute lately, because numbers are down and we know that something major is going to have to change for us to keep running. But this group is great, and I'm buoyed up by spending time with them.

Saturday, June 8: I spent the day at Fox Run park doing an orientation mini-retreat with students. Meanwhile, Josh is home with the kids and Lorien is puking. Grandma Keffer goes to sleep and doesn't wake up.

Sunday, June 9: I stay home from church with Lorien

Monday, June 10: I hold the internship kickoff for students and supervisors for the summer 2013 term. Meanwhile, we are all praying that Josh's sister Christy will go into labor, because she knows there will be a funeral to attend for Grandma Keffer shortly and she doesn't want to miss it. Labor commences.

Tuesday, June 11: Our niece Kayla Eden Randall is born in the wee hours of the morning. The Black Forest Fire begins, about 7 miles north of our home.

Grandma Keffer dies at 11:45 p.m. As it turns out, Josh was the last family member who was able to visit with her while she was still conscious. He knew when he left that it would be the last time he'd see her. Such serendipity.


Wednesday-Thursday: I can't even explain what it feels like when there's a fire so near. Everything slows way down. You sweat, and try to keep from breathing too much smoke. And you watch the news. A lot.

Sunday, June 17: We drive to Greenville, Illinois, and arrive in time for Grandma Keffer's visitation.

Monday, June 18: We attend Grandma's funeral and a lovely dinner given by her church for the family, then drive back to Kansas City.

Tuesday, June 19: We drive back to Colorado Springs. Remind me never to do long drives FOUR days in a row with small children. What were we thinking?

Thursday, June 21: I get a "high importance" invitation for a Friday afternoon meeting with my two supervisors that will last for 15 minutes. No agenda is indicated. Nothing good can come from that kind of meeting.

Friday, June 22: I am informed that my job will be ending on August 2, due to program cuts.*

Seriously, you can't even make up two weeks like that.


*this is a link to the official FLI announcement. It's not clear from the story that staff cuts were part of the program changes, but four positions were cut, including mine.