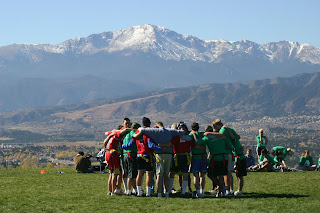 Last Friday, I found out that my job at the Focus Leadership Institute will be ending on August 2. By the time I cross that finish line, I'll have invested 11 years and one day there. Eleven years. That's a big chunk of my 36-year-old self.

I'm thankful that I got some hints that this was coming. Because of that, I got to process a lot of the nasty emotions about a month or six weeks ago. When the news actually came, it wasn't as messy as I expected it to be.

I'm feeling so many things right now, but one of the big, persistent, obvious ones is sadness. I love this place. Mostly I've loved my job—except for frustrations over technology (and those were many!) and saying goodbye three times each year. I'm one of the blessed ones who can say there are parts of my job that I would do for free. And because I'm so blessed, I'm grieving the loss of this place.

Can I grieve out loud for a few lines?

10 Things I will Miss About FLI

1. Meeting with students in my office. Just to talk about life, or what they're learning in class, or relationships, or what they think they're supposed to be when they grow up. A couple of weeks back, I got jazzed about this TED talk by Meg Jay. She talks about the crucial adult development that takes place in our twenties. For the past decade plus, I've had a front row seat to that development in hundreds of students. And I'm awed and humbled to think that for some, I've been able to be an instrument in that development. Wow. Just wow.

3. Raising my kids around college students who love Jesus. Tonight was like so many Thursday nights in the past 11 years. We ate dinner (Chick-Fil-A) with the summer class at the home of Ken and Sarah Ogden (they're in their mid-eighties and they started the Institute back in 1995). It's an awesome Colorado back yard with scrub oak and a gazebo and a water feature. My kids were super bored until some of the students decided to take them "hiking" in the back yard. How awesome is that?

When I was 23 and single, an older coworker once said to me, "I always tried to find people who were younger than me and cooler than me who would tell my kids the same things I was trying to tell them." Because of the Institute, I've had that in abundance. 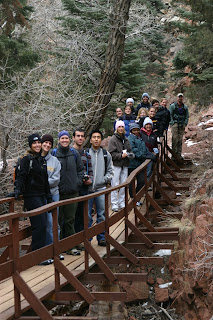 4. Retreats at Horn Creek. And ski trips. And rafting trips. And rock climbing trips. Most people don't get paid to do those things. I did.

5. The questions. I don't get embarrassed any more (not that I did much before), because students have asked me everything. That's just part of the culture here.

I remember one family dinner night, I was sitting with four or five students and two kids of another staff member. The younger boys were probably 10 or 12 at the time. The students chose the conversation topic: contraception. After dinner, I figured I'd better give the kids' parents a heads-up, just in case they had some awkward questions in their home that night. :)

6. The rest of the staff. They have been my second family. (OK, my third family, since I got married a little over a year into the job.) I have to admit that at times I felt guilty because we'd occasionally ignore the students because we were busy enjoying each other. But I think in the big picture, students benefitted from the strength of the staff community in ways similar to children benefitting from the strength of their parents' marriage.

7. Reunions. Oh, they were emotionally overwhelming. And physically exhausting. I don't think my feet were ever more tired than at the ends of those weekends. But they were so good, encouraging and satisfying. The 2010 all-alumni reunion was the most complex event I ever planned, and thanks to the wonderful Focus events staff, it was exquisite!

8. Sneaking into class. I got to work next to some first-class faculty in my time here. People who could teach a three hour class without putting anyone to sleep. For real. I love that they encourage students to think critically and ask tough questions.

On slower days, I'd slip in through the back door of the classroom and catch a few minutes of the lecture, just to stay current on whatever was getting the students fired up.

9. Ray VanderLaan. OK, I know I just got done writing about colleagues who can teach for three hours and not be boring, but this guy can teach for eight hours and not be boring. Every time he came, the room was packed. He pushed my desire to know Scripture beyond any limit I had previously known. Annnnnddd...in 2007, Josh and I got to go to Israel and Turkey on a study tour with him: opportunity of a lifetime.

If you've been a part of this community at any time, what do you miss?