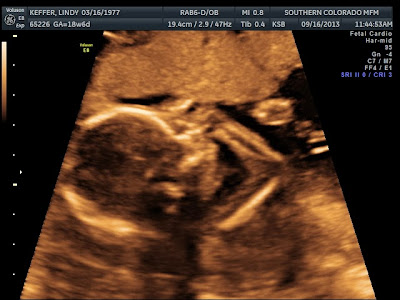 We got to take a peek at our little guy on Sept. 16. That was just a day short of 19 weeks gestation, and a little early for the fetal anatomy scan. Let me back up a little bit and explain why...

Throughout this pregnancy, my OB and I have been having the requisite talks about "advanced maternal age," because I'll be almost 37 when this baby is born. Since genetic abnormalities are the biggest risk of births to older mothers, one choice we made differently than we did with Lorien and Josiah was to have the routine testing done for those abnormalities. I wanted to have some time to adjust to a new reality if something was wrong.

A week or so after a healthy-looking almost-13-week ultrasound, my OB called to say that two items from the accompanying blood test had come back high-risk: trisomy-18 and trisomy-13. I knew from talks during the first two pregnancies that these are severe abnormalities. Most babies who have them don't make it much past birth, if they even make it that far.

Knowing that both trisomy-13 and trisomy-18 would likely show up as anatomical abnormalities on an ultrasound, I didn't worry too much at first because we had just seen a healthy baby at our 13-week scan. My doc said the follow-up would be an extended ultrasound and consultation with a perinatologist. Since we love ultrasounds, we didn't mind that either.

And then came the call from the lab to schedule the ultrasound ... four weeks later. Even though I had purposed in my heart not to worry unless the perinatologist was worried, you can accidentally worry about a LOT of things in four weeks.

Add to that the fact that, though I had felt baby move at 17 weeks, I wasn't feeling him nearly as often or as strongly as I thought I should be by now. So even though I didn't mean to, I worried.

Joy on the Ultrasound Table

The morning of the 16th, I was so glad to just get to the appointment and find out the truth. The first thing the ultrasound tech said lifted a huge weight off my shoulders. Apparently, the placenta is attached in front this time. Not a problem, she said, but "You might not feel the baby as early or as much." Ahhh, relief! It all made sense after that.

She continued the scan and at some point felt confident enough to let us know that everything she was seeing was perfectly normal: "The doctor is going to come in here and tell you there's no way this baby has trisomy-13 or 18." Relief again.

To make a long story short, that's basically what happened. The perinatologist was one of the kindest doctors I've ever seen, probably because he's had too much practice giving people really bad news. He confirmed that, while he couldn't make any guarantees, everything he was seeing on the scan looked healthy. He even repeated one of the views with the tech, exclaiming that it was a really good look at some particular feature of the heart, "because this baby is just so pretty." Relief again.

I have often said that my girlfriends who have been through infertility, miscarriage, fetal demise and stillbirth are some of the most spiritually deep people I know. Entertaining the possibility of that happening to our family, even briefly, just reinforced to me that that experience is something you can't possibly imagine unless you've lived it. And that God gives enough grace just when we need it.

Out of the Mouths of Babes

Lorien and Josiah are generally excited about having a baby brother, although Josiah did blurt out, "I'm the baby boy!" when we told them.  What he doesn't know yet is that he's finally going to get a sibling who might be amenable to wrestling with him. We think he'll be OK with that.