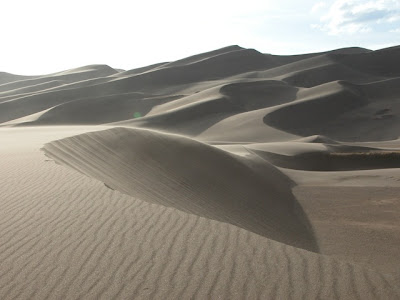 Have you ever climbed a sand dune? I’ve done it in two different places—near the shores of Lake Michigan in northern Indiana, and at Great Sand Dunes National Park in Southwest Colorado.

With every step you take up the dune, your foot slides halfway back down. So you make progress, but very slowly. And while it is beautiful—even exhilarating at times—it is exhausting.

This fall semester has felt like climbing sand dunes to me.

Learning a new job at work. Being a new parent (every step is still new, even though we're more than a year into the parenting thing). Settling into a new house and wanting so badly to do the fun things—painting and decorating—but struggling just to go to bed with a clean kitchen every night. And just when we reached the point of being unpacked, organized and ready to tackle some house projects, we realized we were out of money. Overspent on our budget actually. So Josh and I both picked up some freelance projects to earn some of that cash back. To say the least, balance in life feels like an unattainable goal right now.

I AM making progress. But it is slow. And it feels like one step forward, one-half step back.

It is also a very strange place to be in because I unequivocally love everything I have invested myself in. Marriage, parenting, students, church. I don't think I've ever had a season in life where so much has been so good.

But in the two weeks before Christmas vacation, both my chiropractor and my dentist confirmed that I am carrying a lot of stress around in my body. I know they're right. I also know this is why I spent most of my Christmas vacation sick. When I finally slowed down, I got the worst respiratory crud that I've had in a while. For a couple of days I was pretty much on the couch. For the rest of the time, I have been coughing, sniffling and fighting a sore throat.

The good news is I have had little on the schedule and lots of time to rest—even sleep in, which is amazing. But still, I hate having spent my vacation that way.

I am not writing this to complain. I just want to make a record of this time in my life, because I am eager to see what God will bring out of it. I know I can't maintain this pace forever. But I don't see any chance of the treadmill slowing anytime soon. I am living in that realm where I can't do it in my own strength, and I know that's often where God shows up. I just want to set up a mile marker, raise an Ebenezer, to remember this time, this place I'm in. Because it feels like a place that's growing fruit. I just don't know what the fruit is yet.