Introducing ... the newest member of our family: Blackwood's Rose's Alexander McKenzie, or Xander for short. He came home on Friday, January 7, after Josh spent the previous week building this: 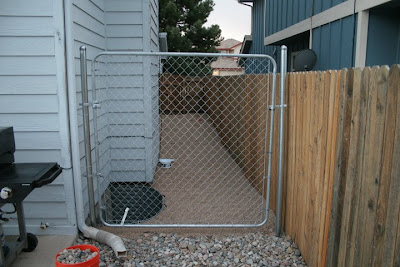 We got Xander from the Colorado State Prison Trained Dog program, which I think is awesome! The program rescues dogs from shelters, or has dogs donated, then teaches select prisoners to train them. The dogs live with the prisoners 24/7, so the inmates get to see the results that consistency, loyalty, discipline and love can bring. The head trainer (a professional dog trainer, not a prisoner) told us that she has heard many prisoners say that this is the first time they have ever finished anything in their lives. I love that! And it also gives the inmates an employable skill for when they are paroled. And the program is paid for by the adoption fees, so no taxpayer dollars are spent in it.

Josh and I both grew up with German Shepherds, so that was an easy decision (although my all-time favorite dog was mostly Husky). Last Friday, we drove down to Canon City to meet three Shepherds that were up for adoption at the time. Here is Xander the first time we met him: 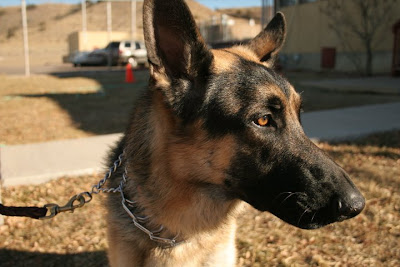 Of the three dogs we met, one was too hyper, one was too timid and Xander seemed to be a good balance of the two. Plus, he was very gentle with Lorien, just sniffing her, not knocking her down or anything. As a bonus, he came to the program from a breeder, not a shelter (hence the excessively long name). The only reason he wasn’t used in their breeding program is he carries his tail too low or something to that effect. So basically, we got a real deal on this dog—he is beautiful!

We had previously been told that he wasn’t ready to leave the training program yet, but after meeting him, we found out he was. So it was a little surprise to be taking a dog home immediately, but it was a good surprise.

Xander is house trained and knows basic commands such as sit, lie down, stay and come. He has been very good at night: we put him in his kennel and don’t hear a word from him until morning. He has only had a couple of accidents inside, and I don't think that will be a long-term problem, once he gets the lay of the land here in his new digs.

The house-dog thing has been an adjustment for me, since I’ve only had outside dogs before. But the fact that he’s already trained helps a ton! Also, after about 2 days, he decided to become very protective of Lorien, protecting her even from Josh and me, so we’ve had to work on that a bit. We called one of the head trainers (which is one of the benefits of the program) for advice and he basically said that we need to teach Xander that Lorien is our puppy and not his. :)

So, here’s to a new season in the Keffer household. Xander has already helped us to get outside and walk more—something we like to do anyhow, but sometimes can’t find the time or motivation to do. Plus, I am so glad for Josh to have a dog. He loves them so much and is very good with them.

And that’s all I have to say about that. For now.