Like something out of a Robert Frost poem, I spent the weekend watching the woods fill up with snow. Each year, Women’s Ministries at First Pres hosts Mom’s Weekend Away. I wanted to go last year, but nursing made it too difficult. This year, I was determined to make it if I could, and Josh figured he’d do just fine hanging out with Lorien for the weekend.  I really needed the time away to rest and be refreshed, and I’m so glad I went. 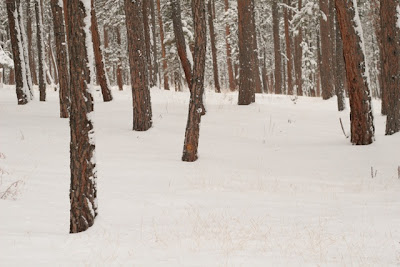 Didn’t get too many pictures of the venue, but it’s a rambling bed and breakfast/retreat center in Black Forest, Co., just 15 or 20 minutes up the road. It is tucked back in the trees, and it is sooooo quiet there. 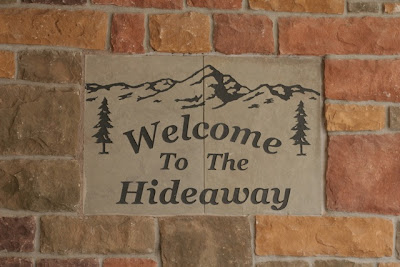 The one slightly intimidating thing about the weekend was that I didn’t know anyone else who was going (or at least I wasn’t aware of anyone I knew who would be there). As it turned out, I knew just four of the other young moms and a couple of the mentor moms, so that was kind of a strange experience. Most of the ladies there were from MOPS at First Pres, and that’s something I've not been able to be involved in because of work. Amazingly enough, of the four young women I knew, two of them ended up in my small group for the weekend, so that was a great comfort.

Beyond that, I just have to say that the Lord had so much for me that weekend. Sleep. Tears—I literally cried all the way through the afternoon quiet time on Saturday—not really because I was upset about anything in particular, but because I needed the release of tears to let out all that was built up inside me. Guilt. Exhaustion. Worry. Questions. Uncertainty. Also, a speaker with whom I immediately found a deep connection, and through whom God brought good food for thought and very deep conviction.

And finally, a strange experience of being on “the other side” of the mentoring equation. I’m not even sure I can explain the strangeness of that experience except to say that, after working with college students for more than eight years straight, I have spent very little time being the “little sister” and a whole lot of time being the “big sister.” To sit in on an open-ended Q&A with more experienced moms and not be the one answering questions was weird. And moreover, it was weird that it was weird. I mean, I don’t think 33-year-olds are supposed to have that kind of feeling in that kind of situation. Nonetheless, that’s my life, and I love it. But it did occur to me that I should probably make more of an effort to get on the little sister end of the equation at times.

Josh and Lorien did a great job holding down the fort at home. She didn’t really notice that I was gone. And daddy taught her to say “beam-a-back” (beanbag) while I was away. :)