In all the craziness of house-selling, I didn't get Lorien's seven month pics posted as quickly as I'd have liked.
Here goes: 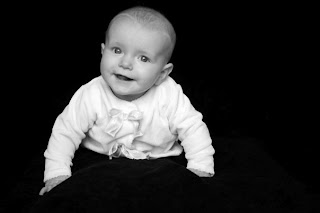 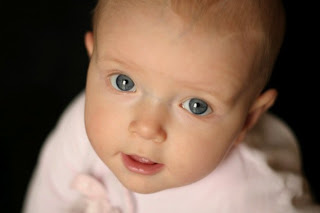 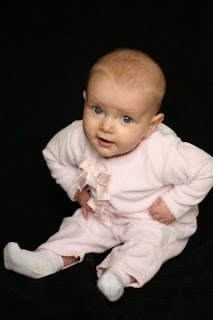 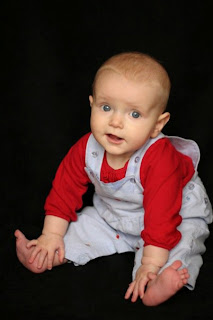 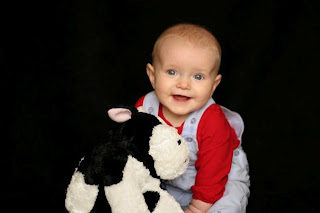 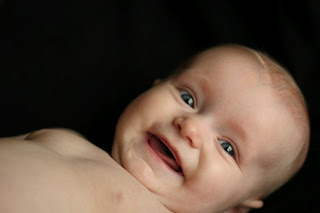 To be honest, reaching seven months was a rough time for us. I should have known when I wrote this update that I was tempting fate. Even though Lorien had been sleeping like a champ since 3.5 months, something went wrong at about 6.5. We had started her on solid foods just before she hit 6 months. It took her about 3 weeks to really get the hang of it. When she did, all kinds of stuff happened: She stopped sleeping well at night; her tummy hurt; she cried when she pooped; her nose was runny; her diaper rash was terrible.
After a couple of weeks of that with no letup, my mom suggested we stop the solids and go back to just nursing for a bit. Almost immediately, we could tell she felt a bit better, but she still wasn't quite normal. And we also noticed that she wasn't eating nearly as much (from her bottle or when she nursed) as she had prior to starting solid foods. I took her to the doctor just after she hit seven months, and the doc confirmed that she had simply gotten more solid food than her system could process (even though she was only eating 2T. at a time, at the most). She also surmised that the loss of appetite wasn't so much a lack of interest in eating, but an overabundance of interest in everything else that's going on around her.
Whatever it was about the solid foods that was bothering her, she must have gotten it all out of her system, because the day she went to the doctor (last Monday) she snapped back to her very happy self and has been that way ever since. So we are starting solids again, very slowly this time, and she seems to be handling it better. Because of the eating disruptions, she is needing to eat once in the middle of the night again, but that's OK. I know it won't last forever.
Other things she's doing these days:
I am so glad to have my happy girl back. Even when she was feeling badly, she was still a pretty good kid, but it's nice to have her back to normal.
at 8:52 PM